This is the second in a weekly series of posts about playing and critiquing one game for each of the 52 weeks of the year. Find all of the posts in this series here. 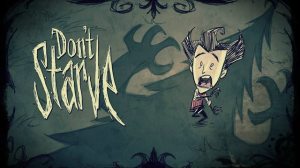 Don’t Starve is a third-person survival game, with a side of cartoonish, Edward Gorey mixed with Tim Burton stylized horror, from Klei Entertainment, famous in their own right for the charming Mark of the Ninja, Eets Munchies, and  their highly promising forthcoming game: Invisible, Inc. Players initially control Wilson, the “gentleman scientist,” a young man who, perhaps erroneously, listens to a voice inside of his radio that tells him to create a machine that is later used by the game’s antagonist, Maxwell, to transport him into a wild wilderness teeming with creatures who want nothing other than to kill poor Wilson. And, of course, nightfall brings with it pitch darkness and the arrival of Charlie/the Night Monster, which is a near instant-death scenario for every character. 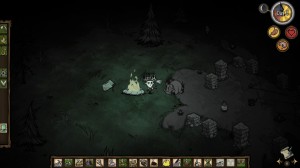 I’m going to make a big statement about this game: in my honest opinion, Don’t Starve is what the survival system in Minecraft should have been.

This isn’t going to be a post against Minecraft by any means. I remember it from its earliest incarnations, I adopted it relatively early on the PC, I played it on the Xbox 360. The amount of hours I put into Minecraft is disgusting and ridiculous. To its merit, Minecraft was really the first robust sandbox survival game that had such a grandiose mass appeal and naturally, it would be wrong to ever say that Minecraft did something wrong.

I had difficulty having fun with Minecraft, at least in its earliest PC iterations, because the level of entry was so high. You could, in theory, experiment a bit with the crafting table and figure out some recipes, but in general, the interface was so dense that it almost forced me into the wiki just to figure out what I was supposed to be doing, and maybe actually make a productive effort at surviving effectively instead of wandering around day in and day out until I starved to death or was killed by anything that came out after dark. This was fixed completely by the Xbox 360 edition, which held players’ hands so tightly that for many, especially those who had been forced to learn the hard way, it ceased to be fun completely. But suddenly, it became incredibly popular with children.

Don’t Starve is an unforgiving, permadeath survival game with a level of entry that is almost deceptively low. The game does not hide its crafting recipes, most of which are insanely logical in their construction, and does not, initially, make you work too hard to get what you need. At least in the 10 games I have played in the past week, I’ve always been deposited at the start into a lush grassy area full of the most important necessities for survival: trees, grass, saplings, flint, carrots, and berry bushes. As you collect, the game alerts you as to what you can craft based on what you’re carrying in your inventory. Day one: make an axe, get logs, make a fire, try not to starve.

I died on the first day in my first playthrough because I didn’t really realize what nighttime meant. On my second playthrough, I made it to day eleven.

The game shines because it is easy where it needs to be, punishing where it should be, and the player is forced to be ever vigilant, forward thinking, and creative, and players who are able to take what the game might throw at them at random are endlessly rewarded with greater depth and greater danger. Starving is a very real hazard, perhaps one even more dangerous than the darkness (or insanity, hounds, spiders, eyebirds, and treeguards, though the jury is still out about the living nightmare that is wintertime), and each playthrough throws new challenges and situations to overcome. Permadeath, while it can be frustrating to players who worked hard to build up a home base, is a better teacher than any other mechanic, and the player is encouraged to make important, if not difficult and necessarily strategic, decisions toward its prevention. Make a meat effigy but deplete my health? Adventure away from home and through the wilderness just for a touch stone?

The gameworld, as strange as it is, is full of things. So many things. In one playthrough, I found Chester, an adorable little walking chest monster. In another, I found the pig king. In another, the doorway to adventure mode. There are still hundreds of things I’ve yet to encounter, and the knowledge of that alone makes picking up the pieces and trying again more than worth it. Every time I play I get better, I make better decisions, and I try my best not to starve. 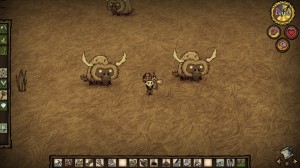 The Beefalo wouldn’t look out of place in a Gorillaz video.

I was hung up on trying to write this section because I honestly enjoyed Don’t Starve so much during my week with it that I had difficulty putting into words what I didn’t like about the experience.

Permadeath is the easiest thing to pick out as a feature that I probably didn’t like as much as the others, for likely the same reason that many people didn’t. I had a great setup, a strong farm, and I had days to go until winter. I went on an expedition after the spiders that lived near my home base just so that I could make a tent to make it through the winter with. And it wasn’t the spiders that were the problem here, it was that hounds attacked me while I was stuck moving slowly through spiderwebs. And I died, and I was furious.

The purpose of permadeath is obvious to me, and its role is a necessity. It is what makes Don’t Starve truly a survival game, because being able to start over with all my same stuff seems far too easy of an out. It’s what made me learn each time I played, and what forced me to be as strategic I could about what I spent my time on and what items I crafted and when. It’s not really about survival without permadeth, anyway; it’s about how far I was set back based on however far away I spawned from  my base and whatever precious equipment I lost on my corpse(Minecraft, anybody?). But after having come so far, after so many games in such a short period of time, I put down my controller and I stopped playing. It just didn’t seem worth it to try again. But it taught me to never be too comfortable, to  never believe that whatever luck I had in finding a good place to settle was worth relaxing over. I was convinced that I had it in the bag and that winter would be a breeze, and that was my own mistake.

I would also note that, while the entry level was pretty low, and the crafting recipes logical, the locations of items were often the part that sent me running to the wiki in order to prevent wasting precious time. Manure is needed to create farms and help plants to grow faster, for example, which are a staple of any home base. But, of course, manure can only be found from Beefalos, which are only located in the grasslands, and to that end, only some sections of grasslands, and occasionally it was kind of a wild romp through the wilderness to try and find a place worth settling down for.

This too, is a logical aspect of gameplay; obviously nothing should be easy to find–if it were, there would be no point in exploring. Rare items wouldn’t be rare. It is the same as the Minecraft coal issue: looking for coal is one of the most basic components of your survival. Someone please forgive me for constantly comparing this game to Minecraft, because Don’t Starve is different, in a number of ways, such that it’s difficult to even put the two into the same category.

Don’t Starve is a wonderfully charming if not devastatingly punishing game that is just as horrifically adorable as it is stressful. It is far from a little indie title and truly shines as an imaginative and unique entry in the survival genre, exhibiting an utter mastery of mechanic, of lore, of content, of story, and of reward that puts stress on replayability and customization. If players tire of survival mode with Wilson, there are eight other characters unlockable through play, each with their own strengths and weaknesses, to speak nothing of the grueling adventure mode hidden away in the wilderness that challenges only the best of players to defeat Maxwell once and for all. The frustration of permadeath is a mere fraction of the joy and hypnotics of gameplay, and I regret now all of the weeks I kept this tucked away in my Steam library, never to play it until now. Throughout this week, I played this game on both the PC, where I originally purchased it, and on the PS4 and it is difficult to decide which platform is better suited for it. With it being free for PS+ members, it feels like a robbery.