This is the third in a weekly series of posts. Yes, I’m a little bit behind. Find all of the posts in the series here.

Contrast is a third-person puzzle platformer game for the PC, PS3, PS4, and Xbox 360 from Canadian studio Compulsion. Players act as the doll-faced Dawn, a contortionist and the best/imaginary friend of a young girl, Didi. Dawn is unique in her ability to shift through reality, able to transform into a two-dimensional shadow version of herself as a means of traversing the world and solving puzzles. Dawn assists Didi in gallivanting through a film noir stylized fantasy world, bearing an air of Montmartre circa Baz Luhrmann’s Moulin Rouge, and pulling together the pieces of her broken family along with way. 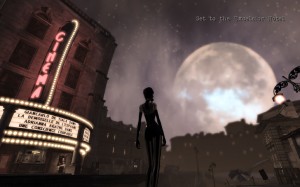 The beauty of Contrast exists in its creativity, almost wholly. Indeed, the art direction on the game is quite excellent; the world is a gorgeous film noir tinged with hints of an otherworldly plane, with much of the city evidently existing in spacial limbo, with frequent accidental vaults into the starry abyss not only common, but also achievement-worthy. The game is punctuated with various important places that further bring a special wonder to the game; Didi’s mother, the singer Kat Knight, performs as the Ghost Note cabaret, her father, Johnny, opens a charming circus (which reminded me heavily of Madame Fate, for Mystery Case Files fans),  the magician Vincenzo’s workshop was hidden behind an elaborate planetary orbiter. Visually, it was a wonderful thing, even down to the collectibles found in each act, such as a poster for Kat’s show or a photograph of Johnny–both the only real look we have at any characters other than Didi and Dawn.

Dawn’s shadow shifting ability is also worth commending; while it, at times, felt like a stab at the ‘thinking with portals’ way of game design, many of the puzzles required Dawn using the shadows of the humans we were unable to see realized in three dimensions as a means of platforming. Sometimes it was a matter of positioning light to align shadows, in others it was Dawn reliving snippets of plot points–particularly those between Kat and Johnny–in terms of their shadows. The mechanic  itself is simple, often deceptively so, with Contrast sporing several tricky puzzles and not uncommonly requiring several stabs at them in order to best. 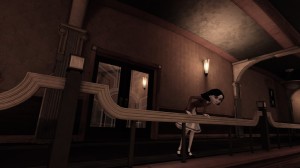 I’m sorry, but after a while, Didi was almost absolutely insufferable.

As creative as Contrast is, it is also incredibly lost. For a world so vivid, it is also very dead; there are never any shadows of people that exist strictly for the sake of ambiance, as they’re only there as pathways to collectibles and luminaries and, as such, it’s as if the world only contains Didi and anyone relevant to her story. This is a fact perhaps explained away by Dawn’s existence as Didi’s imaginary friend, who would necessarily be constrained by what Didi cares about and pays attention to, and which could also explain why much of the world was suspended in limbo, as the game occurs only in places that Didi is familiar with.

This would make sense if the plot allowed it to make sense.

Things start off alright; Didi is a young girl living with her single mother (basically, Jessica Rabbit), who works nights as a cabaret singer. Didi on her own is precocious and Kat has no one to watch her, evidently, and so naturally she goes running all over the city with Dawn, her imaginary friend. Various collectibles point to Didi’s actions as being contentious with the landlady, who threatens Kat’s residency, though this is not a fact that Didi seems capable of listening to, or even cares to acknowledge, going out even in spite of her mother warning her not to. But if she didn’t, we’d have no story.

Enter Johnny, a Jean Dujardin look-a-like, judging from his glamour shot, who is Kat’s husband and Didi’s father. Johnny is a typical deadbeat guy; he’s had past run-ins with the law and spent time incarcerated, and is, of course, working with local gangsters and trying to repay his debts and make a better life for Kat and Didi. Kat is sick of him, and none can blame her for it, but Didi’s childish love of her absent father force her in a chase after him, aiding from the sidelines as he tries to convince the magician Vincenzo to headline his circus.

For the sake of brevity, it is revealed that Vincenzo, who is an epic asshole, is Didi’s biological father. Johnny is probably the best character in the entire game, actively trying to do better for his family, and in love with a daughter that isn’t even his blood. Didi becomes obsessed with finding Vincenzo, who she knows wants nothing to do with her, and yet it is only when she hears it from his mouth that she actually seems to react negatively to the news.

Everything falls apart in the last few minutes of gameplay during which Dawn must scale a lighthouse to direct its light to Vincenzo’s stage after the lights go out. As it appears, the lighthouse houses some of Vincenzo’s secret papers and players who root through it all find out that Dawn is actually a real person, and one of Vincenzo’s former assistants. Vincenzo had been studying the ‘shadow’ people, and had used the the ability to transition between planes of reality in his magic acts.

The game continues on as if this wasn’t even an important plot point and never again addresses it until Vincenzo somehow abruptly warms up to Didi and is shown to shift from shadow to three dimensions, which raises questions as to whether Didi is some kind of magical child existing in both universes, or if Dawn is actually her imaginary friend and not a poor woman stuck in limbo. Didi, in the final moments, seems almost to reject Johnny, even, calling him a mess to his face. The game ends in an entirely inelegant manner, save for the main conflict (between Johnny and Kat) tied up into a nice little bow as they admit their love for each other once again, and the minor threads, such as this paradox of the shadow world, apparently left up for the player to determine.

But, in this case, I found that I really didn’t want to.

Contrast is a beautiful mess, a triumph in art direction and somewhat of a failure as a narrative. As a puzzle game, it hangs somewhere in the limbo between. It is a very easy game, at its core, and doesn’t require a lot of time or dedication to complete, and its bite-sized nature is great for those who are short on time but enjoy attainable achievements. I played it, and I finished it, and I will probably uninstall it from my PlayStation now, but remember always that your mileage may vary. I did greatly enjoy many parts of the game, especially Act II, and enjoyed it enough to see it through until the end, where I inevitably found myself unfulfilled. It is more than worth a shot, regardless of its shortcomings, though perhaps not at its current price tag.